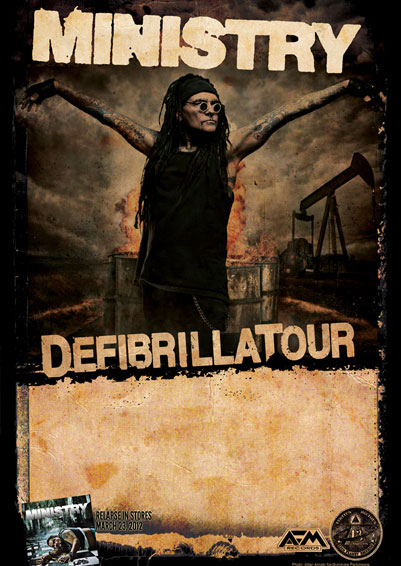 The Norwegian up-and-comer band Djerv is going to exclusively support Al Jourgensen and his industrial metal heroes Ministry at their European tour. Djerv released their consistently high rated debut album last year and stormed on the 8th place of the Norwegian charts instantly. The band members aren’t unknown in the scene. For example, singer Agnete Kjølsrud was also the singer of Animal Alpha and also appeared as guest musician in Dimmu Borgirs video "Gateways". Other members played at Trelldom and Stonegard.

There's not much more to be said about Ministry, they are classified as the inventor of industrial metal and a pioneer of the modern metal sound in general. In their baggage is their comeback album "Relapse", which will be by all appearance the hardest album of the band. It will be released at the end of March. You can get a first impression by listening to their single "DOUBLE TAP" which was released back in February.

With Ministry and Djerv an unusual but powerful combo is going to hit the road. No doubt they will leave some open mouth behind – both bands are well known for their intensive live shows. Absolutely don’t miss it!

If you want to get an idea of Djerv, check out their debut music video "Madman here.

Tickets for the german shows are available at www.metaltix.com