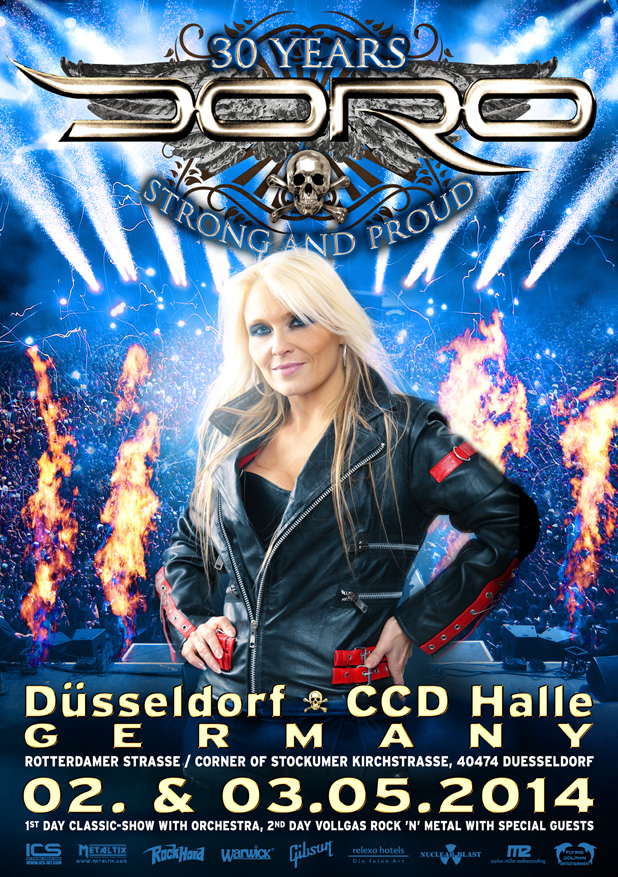 DORO Pesch really hits it off! In 2013/2014 the Metal-Queen celebrates her 30th Throne-Anniversay with special shows all around the world. The phenomenal Kick-Off to this concert row has taken place last Friday at the largest and most important Metal-Festival of the world, Wacken, where 80.000 fans have given their Rock-Queen an overwhelming welcome and international stars of the genre like MOTÖRHEAD, Biff Byford (SAXON), Eric Fish (SUBWAY TO SALLY), Uli Jon Roth (Ex-SCORPIONS) and Chris Boltendahl (GRAVE DIGGER) payed their honours to DORO on stage.

A mega Highlight to the longtime and incredibly successful career of a living legend. But Wacken was only the beginning. „I want to celebrate this big anniversary all year long with my fans around the world“, DORO, who will start an enxtended European Tour with her band from October onwards, explains. „We are in the midst of planning special Shows in London, Paris and New York.“

The crowning highlight of the tour 30 years-Anniversary Tour, however, is already set – and has been officially announced at a huge Press Conference at the Wacken Open Air (W:O:A) in front of countless international Press officials. DORO will celebrate in her hometown Düsseldorf. Two times in a row!

„We are playing two Anniversary Shows, on May 2nd and 3rd“, DORO announces. „The first night will be classic with an orchestra – as the fans got to know and love it ten years ago through the Classic Diamonds-Tour. And the second night there will be a Full-Power Rockshow with all Highlights from 30 years of DORO and several special guests, who accompanied me in the course of my career.”

One of those stars will be BLIND GUARDIAN-singer Hansi Kürsch!

DORO: „The venue will also be very special for those shows, first time ever we get to play at the town hall of CCD Düsseldorf, because it fits the 30-years-Anniversary project perfectly.”

The Relexa-Hotel at Düsseldorf-Airport is partner hotel to the DORO Shows in Düsseldorf and is now offering rooms from 84€ (incl. Breakfast and Shuttle-Service= for fans from around the world. Booking and Info available at: www.relexa-hotel-duesseldorf.de

Tickets for both Düsseldorf shows will be available from today on at www.metaltix.com

There will be each 1-Day tickets and a limited amount of 2-Tagestickets: