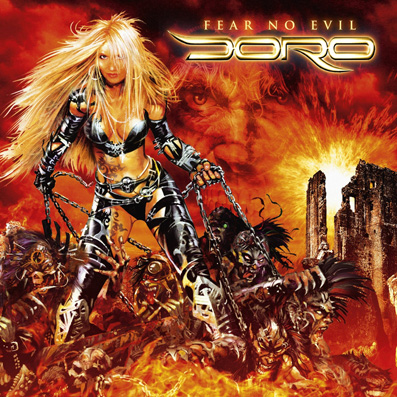 She is a phenomenon, the one and only “Metal Queen”: Doro Pesch! No other singer has left such marks in the traditional Rock/Metal like the petite lady from Duesseldorf. An unexampled creative output and constant and extensive touring since 25 years by now(!) underlined the special position of the Metal Queen.

She was already very successful in the beginning with Warlock, which became a cult band itself, but she was able to top that by far with her subsequent solo career. The secret of her success is certainly caused by the high musical class, which everyone is able to recognise immediately and by her personality. Everything that Doro creates comes from the bottom of her heart. Her passion is also expressed in her very personal lyrics, that always touched her fans.

After two awesome and very successful advance singles entitled “Celebrate” and “Herzblut” (“Celebrate” achieved the third place in the Spanish single charts!) were released, the new studio album “Fear No Evil” will be released finally on January 30, 2009. The material is definitely back to the roots, but also shows that the artist Doro has developed further. Titles like “Night Of The Warlock” is self-explanatory, “Celebrate” is pure and positive Party-Hard Rock. Along with the great ballads “Herzblut” and „Walking With The Angels“ (feat. Tarja Turunen - ex Nightwish) or the aggressive “Caught In A Battle” an impressive stylistic variety is revealed. “Fear No Evil” is Doro´s best album since the 1980´s!!