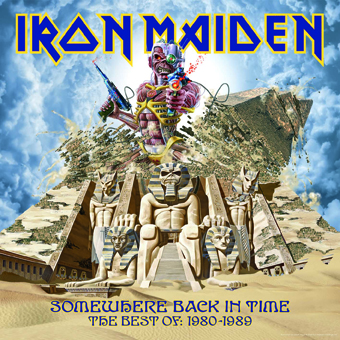 EVERYTHING RIGHT NOW IN TIME!

ROLLS THROUGH THE STADIUMS OF SOUTH AMERICA

MORE STANDING TICKETS MADE AVAILABLE FOR

Iron Maiden have prevailed over the world of heavy metal for almost thirty years, yet are also without doubt one of the most contemporary and exciting bands of the 21st century. And in their defiant spirit of overturning convention – from flying their own plane around the world on a record-breaking tour to selling over 70 million albums Worldwide without mainstream radio or TV support – today Iron Maiden announce a revolutionary new way of delivering music to their fans.

With the overwhelming success of the current ‘Somewhere Back In Time World Tour ‘08’, and the recent No 1 selling DVD ‘Live After Death’, EMI Records are proud to release a very special album on 12th May to chart the first decade of the band’s extraordinary career. The album celebrates the essence of the current tour by featuring most of the essential tracks from the band’s first seven studio albums and one live album, recorded between 1980 and1989, and is aptly also entitled ‘SOMEWHERE BACK IN TIME’ (full tracklisting below).

In an unprecedented move to let younger fans hear, understand and appreciate the quality of these recordings EMI launch the unique SOMEWHERE BEST IN SOUND whereby the curious/adventurous can download the entire album without charge from www.ironmaiden.com as a high quality audio file (WMA) which is a typically powerful 320 kbps. Fans will then be able to listen to the entire album at their leisure three times before the download expires. The listener is then given a simple option to upgrade and purchase the album as a full traditional DRM-free download (so they can then copy or do as they like with the album).

Manager Rod Smallwood explains the thinking behind this innovative move:

"Maiden have a huge catalogue that is highly treasured by fans and media alike. However we recognise that our ever-increasing fan base is very young and can't be expected to know all the earlier albums, which is why we have put this collection together for them. Many of our fans weren't even born when the original albums were first released, although amazingly they seem to know all the lyrics when they sing along with the band at our concerts! We also recognise that 'albums' as such have become unfashionable to many over recent years with TV-generated pop artists stringing a couple of 'hit' singles together with filler tracks and releasing them as a quick fill album which disappoints and quickly becomes dated. So this is both an introduction to the band’s recording history and a chance for young fans to try a full-length Maiden album and realise they’re getting the real deal!

"We wanted to give the kids of today a fair chance of hearing the music as we would have first heard and experienced it in our day when checking it out in a record shop – top quality sound, in their own time and in an environment of their own choosing so they are able to absorb the depth and worth of the music and lyrics that make Iron Maiden the phenomenon they are. What better way to use modern means and a very high quality download! Sadly the WMA (Windows Media Audio) isn't compatible with Macs or iPods but we are confident that our young fans are adept and fluent with modern technology and we will post simple instructions on our website for any that need guidance.“

The full track-listing for the album ‘Somewhere Back In Time’ is as follows:

In further news, last weekend Iron Maiden were the main subject of two major Brazilian TV programmes: Fantastico, the most watched TV programme in Brazil with 35 million viewers, and

60 MILLION people being introduced to Maiden's breathtaking transglobal 'Somewhere Back In Time World Tour'. Both programmes trailered Maiden from the start of the show and closed with extensive footage of the band live and in interviews and of their 757 Ed Force One, putting the spectacular world of Metal and Maiden right up there with the likes of the Rolling Stones and U2 .

The links to the 2 programs are as follows

In addition to performing for two hours on stage with Iron Maiden and then donning his captain’s uniform and flying the band, a 50-man crew, 12 tons of equipment and stage set around the world (50,000 miles, 10 countries and 21 cities!) in Maiden’s own specially customised 757 Boeing named ‘Ed Force One', Bruce Dickinson has also moved into the world of film and has co-written the screenplay for the forthcoming supernatural thriller ‘Chemical Wedding ' which is to be released theatrically around the UK regions in the early summer.

The film is directed by Julian Doyle, who co-wrote the screen play with Bruce and who first stepped into the Iron Maiden world back in 1988 when he wrote and directed the intriguing promotional video for 'Can I Play With Madness'. 'Chemical Wedding’ will be launched at Cannes Film Festival on May 17th when Bruce will fly Ed Force One full of VIP’s for a special viewing of the film. The film stars Simon Callow as Professor Haddo a reincarnated Aleister Crowley who was once dubbed “the most evil man in Britain”.

For the latest up to date news go to www.ironmaiden.com

Further information on SOMEWHERE BACK IN TIME WORLD TOUR 2008

After playing to sold out shows in Mexico City, (52,000 capacity), and Costa Rica, (with 25,000 fans from all over Central America the biggest music event in the history of that country), the band arrived in Bogota, Columbia, to play the massive Simon Bolivar Park in the centre of the city to over 40,000 fans, with another 5000 finding "alternative" routes of access to the show! It was then straight onto San Paolo with vocalist Bruce Dickinson at the controls of their 757 to play yet another sold out show at the 42,000 capacity Palmeiras Football Stadium.

The tour continued through more of Brazil, then Argentina and Chile before departing from this momentous visit to Latin America for shows in Puerto Rico, New Jersey, USA and a final concert on this first tour leg in Toronto on March 16. With all tickets on this leg sold out for months, signs are overwhelmingly positive for Maiden's North American and European Tours in the Summer, by the end of which they will have played to well over one and a half million fans with 66 shows in 30 countries around the World. And, along with further major international news coverage by Sky, CNN and many others, with more to come, this really is a case of taking Maiden and Metal to the masses.

IRON MAIDEN was released April 1980, debuting at No 4 in the UK album chart.

Featured tracks: Phantom of the Opera* and Iron Maiden*, the Maiden anthem which has closed the set on every show the band have ever done, usually with the onstage appearance of ‘Eddie’ the band’s infamous mascot who adorns all their album sleeves.

KILLERS was recorded at Battery Studios London, with new guitarist Adrian Smith in February 1981, and charting at No 12 in the UK album chart.

THE NUMBER OF THE BEAST, also recorded at Battery Studios, was Bruce Dickinson’s first album with Maiden, going straight in at No 1 in the UK album charts on release in March 1982.

Featured tracks: Children Of The Damned, The Number Of The Beast, Run To The Hills, and Hallowed Be Thy Name.

PIECE OF MIND was recorded at Compass Point Studios, Nassau, in The Bahamas, with new drummer Nicko McBrain, going Top 3 when released in May 1983.

POWERSLAVE, also recorded at Compass Point and mixed at the legendary Electric Ladyland Studios in NY, inspired the legendary stage set for the ‘The World Slavery Tour’ which is largely reproduced in the current production and imagery of ‘SOMEWHERE BACK IN TIME’. It entered the UK charts at No 2 in September 1984, having been kept off No 1 by the very first “Now…That’s What l Call Music”, though some have been known to disagree!.

LIVE AFTER DEATH, the seminal album thought by many to be the greatest live metal album ever, was recorded at the legendary Long Beach Arena shows in March 1985 and and at Hammersmith Odeon in October 1984, debuting on the UK charts at No 2 in October 1985

SOMEWHERE IN TIME released October 1986 charting at No 3 in the UK.

SEVENTH SON OF A SEVENTH SON, was released in April 1988, going straight into the UK album charts at No 1. The album was featured at the record breaking ‘Monsters of Rock’ Festival at Donington Park that August to over 100,000 fans.

Featured Tracks: Can I Play With Madness and The Evil That Men Do.

All albums were produced engineered and mixed by Martin Birch.