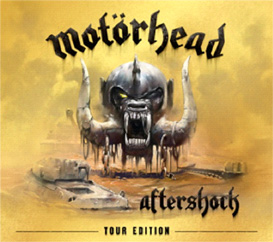 In October 2013, Motörhead released their 21st studio album, Aftershock, to great international acclaim and a slew of top 10 to 40 album spots.

The band held off touring for the album so as frontman and founding father Lemmy could get some too long overdue recuperative rest.

This summer of 2014 will see Motörhead officially tour the European festival circuit, their first strong of shows since the album's release, and to celebrate this, UDR/Motörhead Music / ADA will be re-releasing the album under the title Aftershock - Tour Edition on July 7th. This expanded release will contain a bonus disc of live material comprised from the band's historic appearances at the 2014 West Coast Tour, and in further celebration, UDR/Motörhead Music/ ADA are proud to present "Lost Woman Blues" live from The Warfield in San Francisco on Friday April 18th, 2014. The show was part of the band's warm-up mini tour for the forthcoming European festivals, and the song's performance, verve, swagger and attitude show Motörhead have maintained their rich ripeness and added another layer of grit and polish.

It proves one major thing no-one should ever forget...they are Motörhead, and they play rock'n'roll!

Besides the complete Aftershock album: ( Heartbreaker / Coup de Grace / Lost Woman Blues / End Of Time / Do You Believe / Death Machine / Dust And Glass / Going To Mexico / Silence When You Speak To Me / Crying Shame / Queen Of The Damned / Knife / Keep Your Powder Dry / Paralyzed) you’ll get a live CD for the same price!

Recorded and produced by Cameron Webb

I Know How To Die

The Chase Is Better Than The Catch

Just `Cos You Got The Power