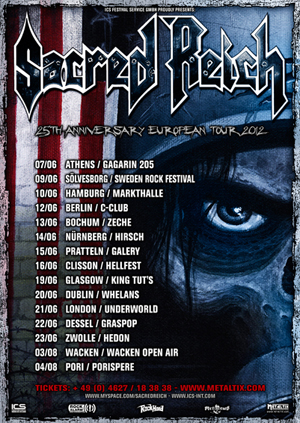 Sacred Reich can look back on an impressive band career. With their debut album Ignorance they climbed the ladder on the top of the Thrash-Metal scene. Legendary gigs like the Dynamo Open Air in Eindhoven Holland and The Marquee in London 1989 were proof of their success.

„As the band slammed into the opening song the room exploded. Bodies were flying over the top of the barricade. An enormous pit broke out. People were jumping up and down and singing along at the top of their lungs […] Sacred Reich whipped everyone in the sold out room into frenzy and never let up.” (P.M. London The Marquee)

True milestones of Metal are Ignorance, Surf Nicaragua, The American Way and Independent.

After a long breakup Metal Blade Records published a CD-Special in 2007 including “Ignorance”, “Surf Nicaragua” and some previously unreleased tracks -as well as the legendary gig at the Dynamo Open Air in 1989 on DVD. With this release it was clear that Sacred Reich were back and ready to revive the metal scene.

The original line-up will hit the road in Europe for their 25th Anniversary Tour. With them they got all classic hits of the band history. A few shows will be supported by Swedish metal heads of Degradead.

Here are all dates of the tour:

Tickets for german shows are available at www.metaltix.com