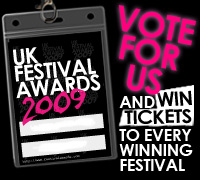 after this year’s overwhelming anniversary festival now Wacken Open Air has become honoured by UK Festival Award 2009 with a nomination in the category “Best Overseas Festival”.

The voting is going to happen in two steps: first, until October 14 the ten best festivals will be chosen, second then until November 4 a winner will be determined which will be honoured in a great gala in the IndigO2 in London on November 16.

Besides participating in the votings in general, you can also take part in a lottery and therefore have the chance to win two VIP tickets.

It would give us a great pleasure to have you voting for us!