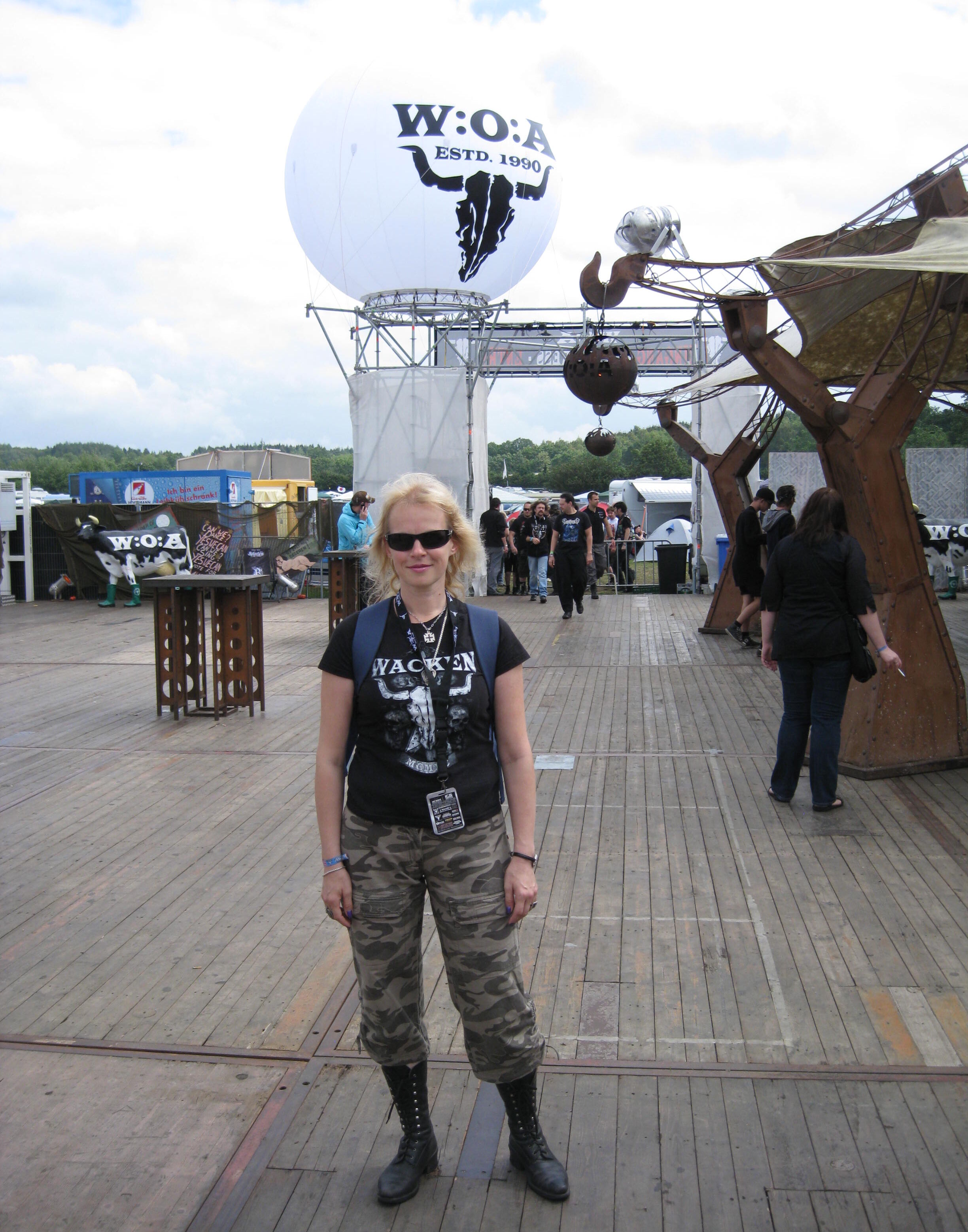 For Birutė Surinenaite, music journalist for www.ferrum.lt from Lithuania, trips to Wacken often turn into adventures. Here are some of her wildest anecdotes — including burning cars and flying pig heads.

„As the W:O:A’s 30th anniversary is getting closer, I am proud to have been a part of the story since 2002. I have travelled to Wacken with my friends, with Lithuanian bands as participants of Wacken Metal Battle, with other people and recently with my husband. I’m experienced in reaching the festival in many different ways including a camper, car, bus, ferry, aircraft, train and even taxi.

When we travelled by camper, we faced the most serious challenge. The weather was very hot that year. We filled the tank with fuel and travelled to Poland. Suddenly other drivers started to warn us and we noticed a fire spreading from the bottom of the vehicle. We stopped and began to throw out all our belongings. We were afraid because of the gas container in the kitchen. Other cars stopped and the drivers offered us fire extinguishers. The police were called, and our camper had to be towed as it was beyond repair.

After this, we rented rooms in a guest house in a small Polish village nearby and called a friend in Lithuania. He is a race car driver and transported one of our other cars to us with his own towing vehicle. It took a surprisingly short time to do this and we were very grateful. We continued our trip to Wacken, which was the most important thing to us! However, good luck was not with us this time. Yes, we reached the „Holy Land“, but most of us stayed for only one night, since we receive a message from Lithuania the next day: Our friend, who helped us so much, had gotten into a deadly car crash, while he was in a hurry to get to a motor race in time. Four of us left the festival to attend the funeral and missed the biggest bands on the main stages. Two of us, including me, had to remain at with no possibility to return. That was not the most comfortable situation, but at least we could stay. Fortunately, some Latvian metalheads were our neighbours at the camp site and they had arrived by bus. Two places were found in their bus, and our new “brothers” took us home to Lithuania. We were happy and sad at the same time.

Next time I travelled to Wacken with my press colleague by aircraft. The trouble began when my companion was checked thoroughly at Vilnius airport. He wore high fur-lined boots and security asked him to show even the inner parts of those. Other people were waiting for us to board for about half an hour, but we arrived in Hamburg in time. We reached the final destination by train and shuttle bus successfully as well. Of course, we were happy to see excellent shows. But when we were on our way back to Hamburg airport we missed the bus. Since we didn’t want to be late for the train and the airplane, we took a taxi all the way from Wacken. Our trip became way „slightly“ more expensive that way…

The third story happened when we, three women, travelled by car. The journey was smooth, we had a good time in Wacken and I even took a personal photo with Metal Queen Doro in the camp! On our way back, however, our car broke down. We barely reached the next village, but it was a Sunday and the local car service was closed. Nothing could be done but to wait in the car until Monday. We found a pond, which was home to a lot of snails. We were not French enough to eat them, but we decided to have fun during the waiting time. We started a snail competition and the prize for the winner was the delicious salad we had in our bag.

The most dangerous adventure happened to me during a Mayhem show. They used pig heads, blood and stuff like that on stage. Suddenly, a massive bloody skull was thrown into the audience and flew by very close to me. Fortunately, the Spanish guy next to me caught it and saved me. Being present in the epicentre of a huge mosh pit during a Heaven Shall Burn show seemed less dangerous than that!

Of course I’m going to be a part of Wacken Open Air in 2019 again. This will be my 18th time, and I’m waiting for it impatiently. The show and my story must go on – see you!“

Birutė’s wish for the 30th W:O:A, if anything was possible:

„Death! They’re still one of my favorite bands. I was very sad when Chuck Schuldiner passed away.“