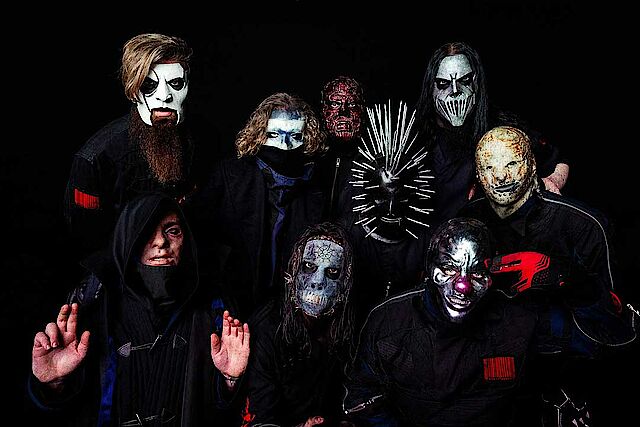 SLIPKNOT emerged at the back end of the 20th Century from the US midwestern town of Des Moines, IA and quickly established themselves as the most enigmatic, provocative, and aggressive collective in contemporary music. 1999’s eponymous debut album is widely regarded as a modern day classic and was honored by Metal Hammer magazine as the ‘Best Debut of the Last 25 Years.’

The release quickly racked up double RIAA platinum certification in the US, with many of SLIPKNOT’s subsequent releases achieving platinum status around the globe. To date, the band have been nominated for 10 Grammy Awards (winning in 2006 for ‘Before I Forget’), as well as scoring 13 Platinum and 44 Gold record certifications around the world, 30 million unit sales and over 2.5 billion YouTube views to date. SLIPKNOT’s fanbase is as unwavering as it is ubiquitous - the band’s last studio album, 2014’s ‘.5: The Gray Chapter’ debuted Top 5 in the Official Album Charts of 19 countries around the world, including the US (#1), UK (#2), Japan (#1), Australia (#1), Russia (#1) & Germany (#2).

SLIPKNOT have released their widely anticipated sixth LP, WE ARE NOT YOUR KIND. The new album is available for streaming on all platforms.

“With their latest studio album, Slipknot have released one of the strongest albums in their career,” remarked Consequence of Sound with The Independent declaring, “The sheer ambition of WE ARE NOT YOUR KIND is just as staggering as their seminal record Iowa – the dynamic might be even better,” while Billboard attested, “Iowa’s greatest musical export has only improved on its genre-busting sound.” The UK’s NME put it simply: “The 'Knot's sixth album is an astonishing record.”

WE ARE NOT YOUR KIND is highlighted by early album tracks “Birth Of The Cruel,” “Solway Firth,” and the LP’s lead single “Unsainted.” Each has come with an M. Shawn Crahan directed official music video, and each has trended worldwide on YouTube (all videos, not just music) - “Unsainted” at #1 worldwide for a full 24 hours. All told, the band has amassed over 52 million views in only two months. SLIPKNOT shook the world once again with the worldwide live debuts of “Unsainted” and their 2018 single “All Out Life” on Jimmy Kimmel Live!, both of which have become the show’s most viewed music performances of 2019 on YouTube. “Solway Firth” is also joined by a Crahan directed official music video, featuring exclusive footage from the new Amazon Original series, “The Boys,” alongside live performance footage from SLIPKNOT’s recent headline festival run in Europe.