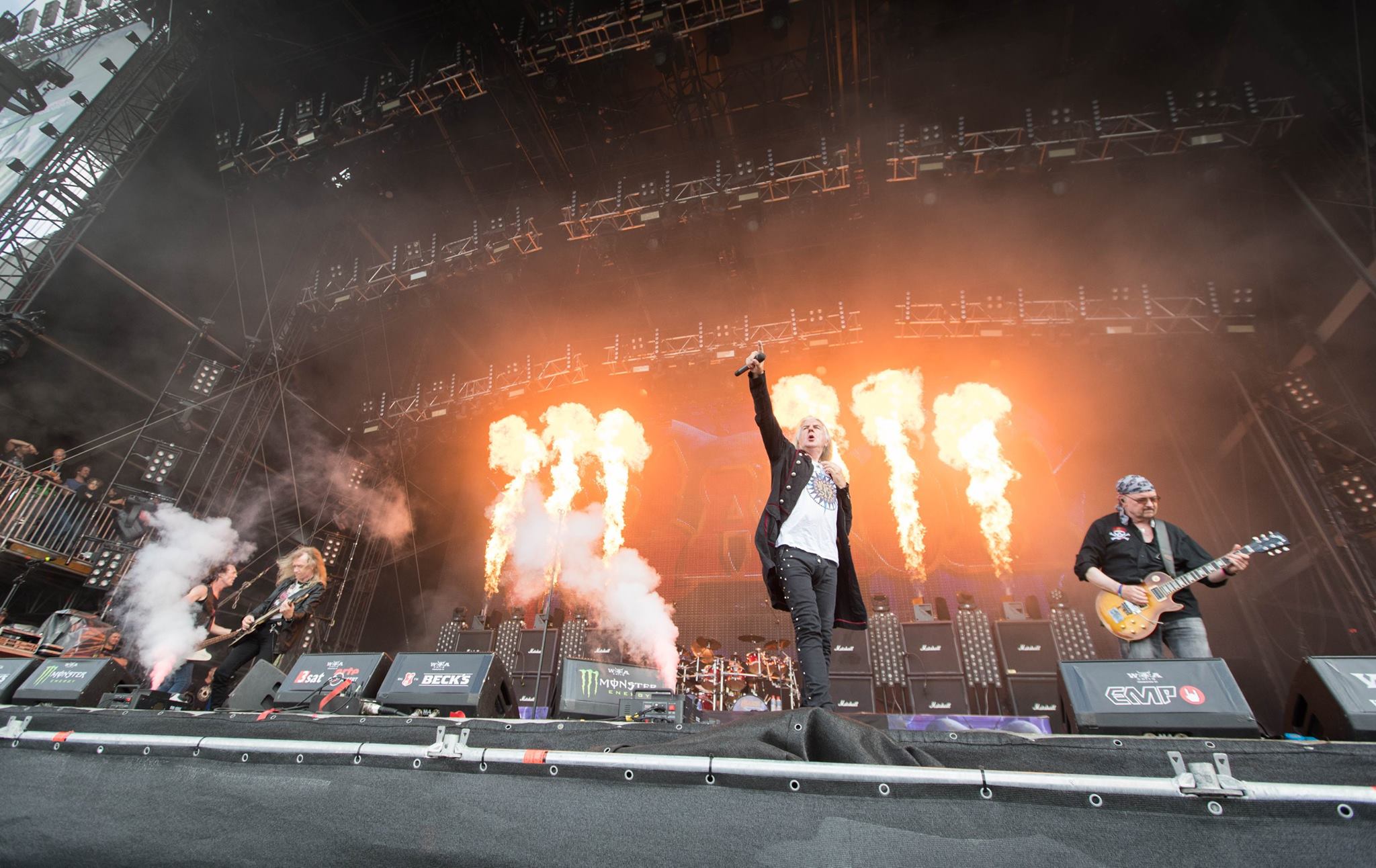 As I walk out for the first of my live action on day 2, I enter the Black Stage area to see a giant wooden reindeer evoking images of some fabled historic horse (minus the beer bamboozled occupants) and to hear Biff from Saxon say the following:

"There's a massive balloon that looks like a giant condom! It's going to go 20 miles in the sky. Thomas and Holgar have asked us to play a song to launch it...this one is called "The Eagle Has Landed"..."

To be fair it isn't how my typical Thursday works, but it ain't half bad!

The weather has held, I am writing this on a smart phone because it is the only thing smart enough to find the internet right now, the mud is starting to harden and the sun had decided to peak out for a bit here and there.

Security has dictated that no-one can bring a bag onto the infield (although several creative sorts are wearing patch-covered sleeveless waistcoats with a zipped 'bag' built into the back) but other than that, Wacken remains a stadt outside any other jurisdictions. A place to escape from everything -whatever, daily life, global strife, what-fucking-ever! And as I absorb the relaxed, loose and uniquely communal vibe of Wacken (because this feels like a matter of honour for every single attendee) Saxon have just crisply crushed "20,000 Feet" and are into "Dogs of War" before Biff dedicates "Heavy Metal Thunder" to Lemmy, declaring that Lemm thought it was 'mad' the first time he hear it. Which would've been the vintage moments right after it was written...oh, and there are LOTS of boots everywhere. Boots and shorts. It makes sense. Trust me. I am in the legion too!...

Weather Report (not Jaco Pastorius!)...it pissed down again today and the mud got thick thick thick as rubber brick...but we trudgers, the tens of thousands of us, we soldiered on. Because that is what you do!

It is 9.30 and I am back at the Wasteland Stage...I LOVE the Wasteland and all it's tribal MaxMaxpostapocalyptic fuck youness. I have no idea who the fuck this is onstage right now, a five piece of grotty Vikingesque grebo-like stature with a dirty low-down riffing groove who just had theatre-maximus with two warrior wasteland girls and a fat cat throwing money around. With FIRE JETS! (I would later learn this fantastically decrepit bunch are Monstagon).

Their filthy groove machine is rooted in big fat low Ds and some serious swagger. Yeah...this is the sort of party I like...there's massive medieval swords and horns about 100ft away (for sale) and hybrid burn-you-down road warrior super vehicles. Yeah. I like this a lot. In fact, my boots are rooted...Monstagon!

...Watching Maiden is a reminder that families always find each other, work for each other, support each other and (when it seems most impossible) stick together. What hasn't this band achieved? Yet here they are, once again pouring it all in, once again connecting with 80,000 people, once again together in their most potent line-up. Murray, Gers and Smith, triple axe attack metal mayhem madness and YES that is written with FULL purpose 80s alliteration, because it is time travel, pure fucking metal time travel, underpinned by Steve Harris and his limber bouncing groove and Nicko McBrain's thunderous tub-thumping. A long and teenagy-80s-scribe wordy sentence for a deliriously long and delightfully timeless icon.

Meanwhile, when he isn't flying 747s or bouncing around the stage like it's a giant trampoline, Bruce Dickenson kicks cancer's arse. And then continues flying planes and bouncing around stages and singing singing SINGING. That is inspirational! By the way, I just witnessed him wearing a chimp mask on the back of his head and asking 'who wants a banana?' before he launched two of them deep into the crowd backwards! ...

The bomber flew so proudly, Phil and Mikkey were tremendous, but hearing Lemm's voice brought shivers down my spine and tears through my face. I didn't want to (he certainly wouldn't have asked for it!) but who has control over that? I was close to this man for 34 years and a die-hard fan for longer. To hear his voice so loud over the PA again hit 'that' note. I hardly drink these days, but I have a double Jack in front of me. Sorry Lemm, no coke, just the Jack. I love him, I miss him and I suspect you do too. So did the 60,000 who roared his name tonight. There will never be another Lemmy Kilmister....I meant to send this 20 minutes ago, but got waylaid by some cheese?...ah bollocks to

this, HE would NOT want it to end like this. So have a drink, play "Always Look On The Bright Side Of Life" and sing ying-tong-iddle-I-po really really loudly through your neighbour's letterbox!!!!! Goodnight boys and girls!

THE AUTHOR - Steffan Chirazi has been a writer, sometime-photographer and interviewer for quite some time. He has written for many publications worldwide, and has run Metallica’s So What! magazine and editorial for approximately two decades.