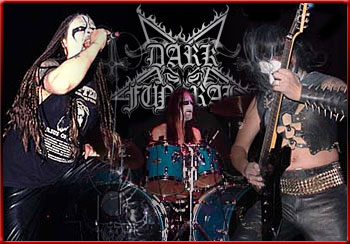 Is when it all began when the mighty Lord Ahriman and Blackmoon (David Parland) founded the war machine we now know as DARK FUNERAL. They were later joined by Draugen and Themgoroth.

The legendary, self-titled and self-financed, mini-cd is recorded at Dan Swanö´s Uni-Sound studio in January. It is released on May 4th to an unsuspecting world. And on that very same day, the band would have performed their very first gig at Luse Lottes Pub in Oslo NORWAY. After the recording sessions, Draugen (drums) leaves the band and is replaced by Equimanthorn. The band signs to No Fashion Records and start preparing songs for a full length album.

After a miserable attempt to record The Secrets Of The Black Arts at Uni-Sound studios (again with Dan Swanö) the band decides to relocate to Abyss Studio and re-record the entire album. In between the studio sessions a new song was written and added to the tracklist "When Angels Forever Die". With engineer Peter Tagtgren (Hypocripsy) on board, the band finally gets the production they were looking for. Shortly after, DARK FUNERAL plays their first festival gig, Under The Black Sun I in Berlin. A few weeks prior to this gig Emperor Magus Caligula joins the band as vocalist and eventually becomes a permanent member. The band also shoots their very first video for the track "The Secrets Of The Black Arts" which is well received and played on music channels all over the world.

January 28th the bands first full-length-album "The Secrets Of The Black Arts" is released upon the masses and the album is soon licensed to Metal Blade (North America) and Mystic Production (Poland). The line-up troubles which first saw vocalist Themgoroth and drummer Equimanthorn leave is soon elevated when co-founding member Blackmoon also leaves. Fortunatly they are more than compensated with the addition of Alzazmon (drums), Typhos (guitars) and Emperor Magus Caligula (vocals/bass). With the addition of Caligula (who most of you already knew as Masse Broberg, the original vocalist of Hypocrisy) DARK FUNERAL is brought to a new level of aggressivity and intensivity. Together with Necromass the band does the Satanic War Tour I throughout Europe.

Also during 1996, the line-up of Emperor Magus Caligula, Lord Ahriman, Alzazmon and Blackmoon recorded their unholy version of Bathory's "Call From The Grave" and "Equimanthorn" for the Bathory tribute, In Conspiracy With Satan. (These stunning cover tracks also appears later re-mastered for the re-titled re-release of the bands legendary debut "In The Sign?").

The second leg of Satanic War Tour follows with Ancient and Bal Sagoth as support. Also, Dark Funeral plays their very first show in America at the Expo Of The Extreme festival in Chicago. After totally desecrating the unsuspecting American audience with their blasphemous stage show complete with impaled pigs heads on upside down crosses matched with the unholy members drenched in pigs blood and finishing the set off with Emperor Magus Caligula's firebreathing. From there the band embarks on the "The American Satanic Crusade Tour" with Usurper in support. Originally the tour was supposed to also feature Acheron and Destroyer 666, but after too many hassles, both bands had to cancel. In September, the road dogs return to the Abyss studio to record "Vobiscum Satanas". Ultra-raw and hyper-fast the unholy duo Ahriman/Caligula have delivered a record that even the last sceptics have to admit that DARK FUNERAL are spearheading Swedish black metal together with Marduk.

The Ineffable Kings Of Darkness Tour with Enthroned and Liar Of Golgotha takes place with Dominion coming into the band as a session bass player. The band also does their second major festival appearance at the Swedish Hultsfreds festival. After the festival, Thyphos is kicked out and Dominion, (who originally was a guitarist), is taken on as the bands second guitarist and Caligula reverts back to doing both vocals and bass. Before the band heads out on the "Bleed For Satan" tour, with Cannibal Corpse and Infernal Majesty, Alzazmon (drums) leaves and the

bands long time friend Gaahnfaust is being added to the line-up. (He was also in DARK FUNERAL back in 1996 for a short time.)

DARK FUNERAL return overseas for another mini-tour "Black Plague Across The West" which finds the band invading, then destroying Mexico for the first time before they head north and lay to waste to the state of California. Afterwards they also embark on their longest and most successful European tour "The Satanic Inquisition" together with Dimmu Borgir.

With engineer Tommy Tägtgren, Dark Funeral record the EP "Teach The Children To Worship Satan" at the Abyss studio B (featuring the new song "An Apprentice Of Satan" and cover-versions from Slayer, Mayhem, Sodom and King Diamond). For the EP, the band also shoots a live video for "An Apprentice Of Satan". DARK FUNERAL join Deicide, Immortal and Cannibal Corpse for the No Mercy festivals. After the departure of Gaahnfaust, Matte Modin (Defleshed) joins the band as a permanent member and makes his debut at the With Full Force festival. With him, DARK FUNERAL becomes even faster and tighter. Also the Wacken Open Air is added to the enormous gig-list. Even a chaotic Canadian/American tour is coming to a good end. Dominion and Caligula are working on their logically titled side-project Dominon Caligula, while Lord Ahriman got in touch with members of Acheron, Incantation and The Electric Hellfire Club to form Wolfen Society. Due to popular demand for the first EP, Dark Funeral re-releases this landmark work of art complete with new a new cover, and never before published photos giving the fans a true taste of the history of the band.

In January/February the band once again enters the Abyss Studio to record their third (and long awaited) full-length album. The new album "Diabolis Interium" is the landmark release in the band?s history. With the help of producer Peter Tägtgren and studio technician Lars Szöke, Dark Funeral have created the MASTERPIECE of their recording careers thus far, a record which will surely be considered a mile-stone in the evolution of black metal in the future. Beside the usual highspeed-songs DARK FUNERAL has also slowed down for ?Goddess Of Sodomy?, which resulted in a mighty hymn of darkness. ?An Apprentice Of Satan?, already known from the last EP, was reworked for "Diabolis Interium". Other highlights of the CD are ?Armageddon Finally Comes? and the brutal opener ?The Arrival Of Satan?s Empire? (which most would agree that this track is THE crown jewel of the Dark Funeral catalogue). "Diabolis Interium" is an absolute MUST for every serious metal-collection, not only black metal fanatics!

Due to the overwhelming positive response of Diabolis Interium from the public and the press, Dark Funeral were able to secure deals that brought their music across to a much wider audience with the license deals they were able to secure in the following new territories; Japan (Soundholic Co.Ltd), Brazil (Hellion Records), Poland (Mystic Productions), Romania (Rocris Disc), Bulgaria (Rocris Disc), Thailand (S.Stack Co. Ltd), Russia (Irond Records Ltd), Taiwan, Hong Kong & China (Magnus Music). With the exceptional response to the album in Brazil which was

released through Hellion Records, another local label, Somber Records immediately got in touch with the Dark Funeral organization to license the bands entire back catalogue.

As soon as Diabolis Interium hit the streets, Dark Funeral once again hit the road. First they toured Europe, supported by Tidfall (NO), Anorexia Nervosa (FR) and Ragnarok (NO). On this tour the band brought in Mikael Hedlund (Hypocrisy) to play the bass. After this tour Mikael resumed duties with his main band. Dark Funeral recruited Richard Cabeza for the session bassist slot. The band also toured US, supporting their long time friends Cannibal Corpse. Pizzing Razor and Incantation was also on this very successful tour. I October 2002 the band made their very first tour in the Far East Asia. The tour included shows in Japan, Taiwan and Singapore. Being the very first western extreme metal band to play Taiwan and Singapore, Dark Funeral were highly welcomed by the Asian crowd who not only understood their brand of dark and majestic music, but also the essence of the band itself.

November 29th 2002, Dark Funeral and MNW/No Fashion Records announced that effective IMMEDIATELY they were no longer contractually bound to Necropolis Records, who had licensed the bands 2001 masterpiece "Diabolis Interium" for North America. Official Termination of Contract papers had already been delivered to

Necropolis Records, putting an official end of Dark Funeral's tenure with said record label. This was a result of Necropolis' deliberate breach of contract with the band and label. Dark Funeral has since then put this unfortunate incident behind them and begun moving on with the future. So far no new North American deal has been signed.

After the Asian tour, guitarist Dominion felt that he could not give 100% to Dark Funeral anymore and felt it was in everyone?s best interest for him to resign his position. He had felt his lack of motivation to dedicate himself to a fulltime touring band was not fair to the band, and also wanted to explore other musical options. Dominion officially resigned upon their completion of the Asian tour. Dominion is and will always be regarded as a very good and close comrade and brother to the band.

After the Asian tour and due to unspecified reasons Dark Funeral decided to keep a low profile. While being away from the limelight, they have, among many things, been busy auditioning guitarists to replace the departed Dominion. A new guitarist was found in the form of Chaq Mol. He has a long history in different local acts with people from Hexenhaus, Face Down and Necronancy. He is also in the two mans Doom/Black Metal project ?Mordichrist? and he will officially make his debut with the band at Wacken Open Air 2003.