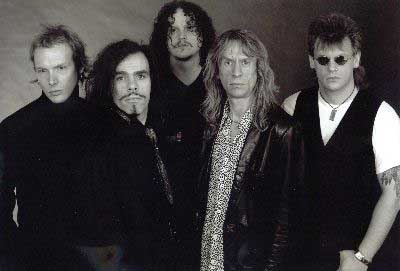 Diamond Head are regarded as one of Britain?s most original & influential rock bands. They formed back in 1976 & toured the UK extensively, supporting the likes of AC/DC, Iron Maiden, Slade & Foreigner.

They released their own album in 1980 ? the classic Lightning To The Nations or White Album which included 4 songs later covered by Metallica: Am I Evil, Helpless, The Prince and It?s Electric.

In 1982 Diamond Head signed to MCA & released Borrowed Time which entered the UK charts at number 24. That year also saw them play the prestigious Reading Festival.

In 1983 they released Canterbury which charted at number 32 & toured Europe, supporting Black Sabbath. They also appeared at the legendary Donnington Monsters Of Rock.

The band eventually split in 1985 to pursue other projects.

The band then had a self enforced inactive period. Meanwhile, Metallica again covered 5 Diamond Head tracks on their 1998 Garage Inc. album. The 4 already mentioned & Sucking My Love.

After some low key acoustic shows in 2001, with additional rhythm guitarist Floyd Brennan, Diamond Head returned to the world stage with a show at the Metal Meltdown in New Jersey. A further successful UK tour in 2002 led to the band returning to the studio to start recording a new album called Host which is scheduled for release in late summer 2003 (label to be confirmed).