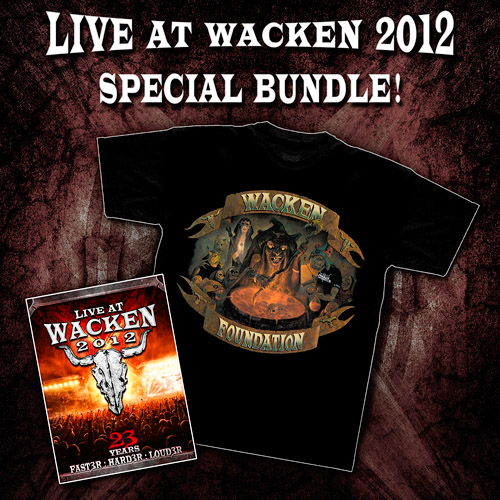 Mudbath, water masses, modder – just to mention some of the most used words in the media coverage about the 23rd WACKEN:OPEN:AIR. And to admit there really came down water masses during the torrential rainfalls and transformed the festival ground into an endless desert of mud. But all that did not stop you to enjoy the W:O:A 2012 and to keep on celebrating. And why should it – with this line-up! Whether metal veterans Scorpions or Saxon; bands from various metal genres like Amon Amarth, Volbeat, Gamma Ray, Dimmu Borgir and Sepultura; or bands like Torfrock, In Extremo and Santiano – there was something for everyone! And you can enjoy this awesome mixture again and again with this release.

For the first time a big part of the sales revenues of this W:O:A 2012-DVD are benefiting the Wacken Foundation. This could only happen thank to diverse bands from the W:O:A 2012, who transferred their music rights to the Wacken Foundation. With the money the registered, non-profit foundation supports young bands of the hard rock and heavy metal scene. The foundation has been founded in 2009 by the organisers of the W:O:A in order to strengthen the existing support of young artists – because we all need the new Metallicas, Maidens and Judas Priests. Meanwhile the Wacken Foundation has supported more than 80 different projects – and counting. With the purchase of this DVD you already made a contribution to the support of metal bands. To see what else you can do to help and what exactly the foundation is working on please visit www.wacken-foundation.com.

The Wacken Foundation presents an exclusive shirt whose proceeds are dedicated to the support of hard rock and heavy metal bands. By purchasing this shirt you don't get just a simple piece of clothing, but you make a clear statement: Yes, I listen to metal music and I support the scene.

We were able to engage a very special artist for the design, whose work is well-known to everyone: Paul Gregory. His cover art for Saxon and Uriah Heep gave a face to several milestones in the history of music. Thomas Jensen, co-founder of the Wacken Open Air and Paul Gregory, founder of the Bloodstock Open Air have known each other for over ten years and they have already worked together on several occasions. Since the work of the Wacken Foundation is very important to both festival organizers, the idea of this art project for charitable metalheads was quickly born.

The t-shirt was produced by Artworx as a strictly limited edition of 500 pieces for the Wacken Foundation at a special price. And now after the festival any remaining Foundation t-shirts will be be offered in a package along with the "Live at Wacken 2012 Triple DVD".