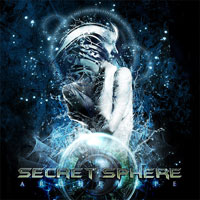 Secret Sphere, one of the best known European symphonic/power metal bands, have signed a deal with Scarlet Records for the release of their new album ‘Archetype’, the sixth in their career. The band’s first release, ‘Mistress Of The Shadowlight’, came out in 1999 and since then Secret Sphere have accomplished many important goals, including two albums released on powerful German label Nuclear Blast and countless tours and festivals around the world, sharing the stage with some of the biggest names in metal such as Megadeth, Judas Priest, King Diamond and many others. Last but not least, in early 2010 they were chosen to open the European tour of German heavy metal veterans Gamma Ray. But the best has yet to come… ‘Archetype’, due to be released in September 2010, has already been described as the band’s most instinctive, mature and energetic album, an overwhelming mixture of classy arrangements, beautiful melodies and powerful rhythms. Be ready for one of the heavy metal highlits of 2010.