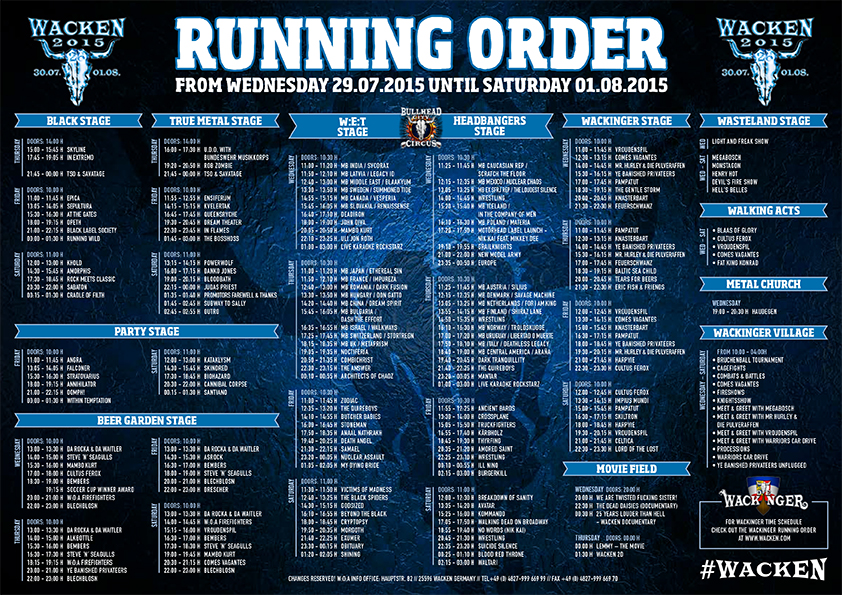 Today we can present you the final printable Running Order as downloadable pdf. The running order pdf is also available as version which is splitted into several days.

You can find the Running Order pdf´s here

Further our good old Running Order Tool is back online! Just cklick on your favorite bands, add them to your list and print your personal Running Order!

The Running Order Tool can be found HERE

Besides the printable Running Orders we can also announce the last few bands to fill the missing tba slots.

Nik Kai, at 14 years old one of the youngest and most exciting six-string talents in the US, is one of the exciting new talents who will feature on Motörhead Music, the label set up in partnership with UDR GmbH. The label’s objective is to offer a world stage to fresh and exciting new talents who carry an independent and heartfelt spirit within their art. It will be a label by musicians for musicians, and it will be an honest and powerful gateway to the next generation of rock’n’rollers.

Despite his youth, Kai has already gathered plaudits and recognition from many avenues, appearing on Howard Stern’s show at 10 years old, receiving a Metal Hammer Golden God award nomination and receiving endorsements from the likes of Gibson/Epiphone, Marshall and Dunlop.

Wacken will be No Words European debut, and the first time a festival audience will be witnessing the precocious, engaging and exciting guitar work of Nik Kai.

Last but not least we want to introduce you to the last 3 Metal-Battle finalists from Romania, Hungary and the Netherlands. With these 3 bands confirmed we now have all 28 participants for the big finale in Wacken complete.

Let´s start with the Romanian finalist. The winner band is called Dark Fusion. The band was founded in 2010 and plays a mix of death and industrial metal. Their first album "InFusion" was released in 2012.

Besides the preparations for the big finale in Wacken they are also working on their second album "Cyber Nation" which will be released this year.

Don Gatto from Hungary stand for pure Hardcore. Founded 2009 in Szekszard tha band released their first EP in 2010. Until today 3 more Ep´s have followed which also featured guest appearances by musicians like Gary Miskel from Pro-Pain. They played more than 350 shows in Europe so far, including a complete tour with Pro-Pain, Individed and Six Reasons to Kill.

From Amsterdam to Wacken: For I Am King from the Netherlands is a female fronted metal band that opens the throttle wide. The music of the band can easily be compared with bands like Arch Enemy and they have played more than 50 shows in 13 months now. And in the same time, they have also recorded and released their first EP and 3 music videos – not bad, right?

We congratulate all finalists to their success and are looking forward to the see them live at W:O:A!