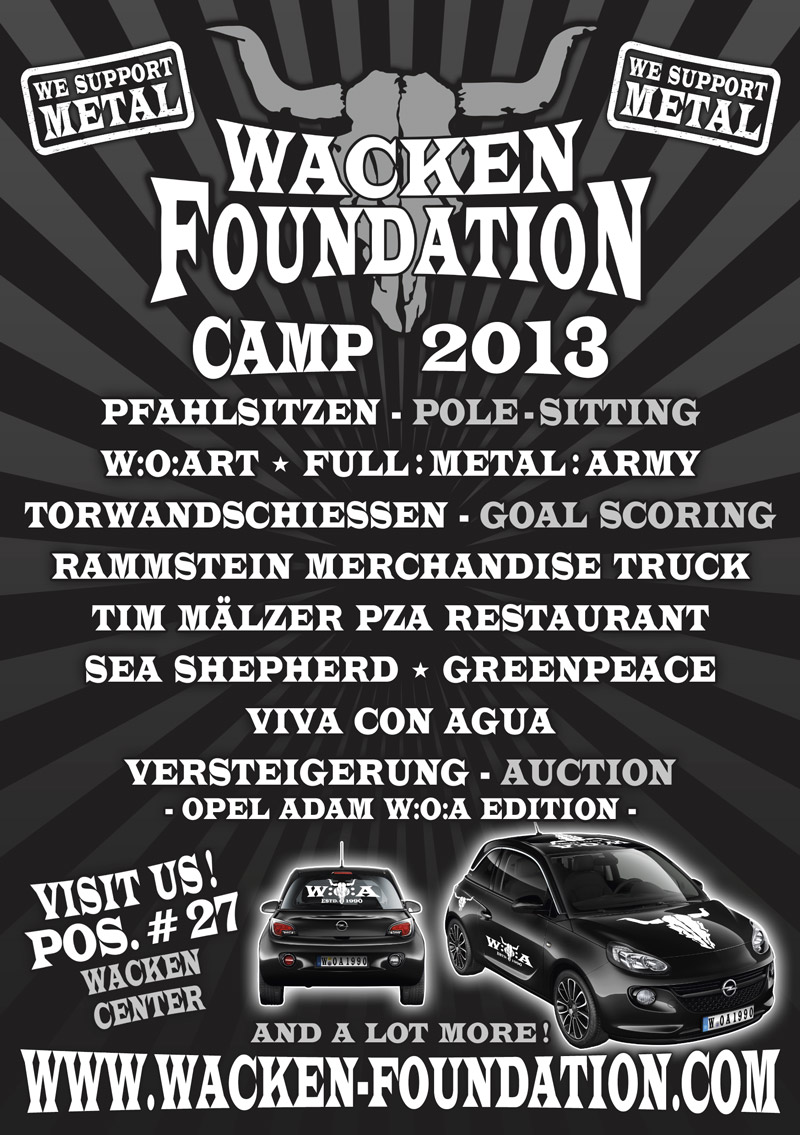 The Wacken Foundation Camp’s second year is coming up – and the camp will be double the size than last year!!

In the camp you can inform yourself about the purpose, aims and projects of the registered, non-profit foundation Wacken Foundation Come along and try yourselves in goal scoring and win great prices. Parts of the proceeds go to the Wacken Foundation that will keep on financially supporting bands and artists from the metal scene to implement their projects. To chill out our large-sized igloo tents with seats are being made available to you.

In direct proximity to the camp there will pole sitting be offered again. Here you can win W:O:A VIP Ticket upgrades. Four companies are taking over partnerships for the poles and donate € 10 to the Wacken Foundation for every hour that you sustain on a pole. Please send your pre-reservations to polesitting@wacken.com.

In the W:O:Arts tent artworks from Grave Digger singer Chris Boltendahl, the comic-strip artists Tim Eckhorst and Kim Schmidt, and from the painters Jens Rusch and Andreas Ole Ohlendorff can be admired. Horus Vision will again display some of their 3D-pictures. Additionally we could win photographer Tom Solo to present a part of his ‘Headbangers Call!’ picture series. This year Schloss Gottorf takes part with their special exhibition about the Nydam boat. Furthermore high quality merchandise boards made from steel, acryl and wood with milled logos will be exhibited by Zynternity. A detailed description of each artist can be found here. This year there cannot only be found art in the arts tent but also a Wacken Coffee-Bar bar and seats that invite you to stay a little longer and let the impressions of the pictures sink in.

The Full : Metal : Army, the official Wacken Open Air supporters club will also be represented with a booth in our camp. The F:M:A acts as a registered, non-profit association since spring 2012 and will be available to answer questions of all interested fans and members in site.

Due to a successful implementation in 2012 in the course of the campaign Metal4Nature – Save your Holy Land the office container of the Wacken Foundation will again work as an energy-self-sufficient island provided with energy from solar panels. In the same way the so called Sleeping Can is being operated, which could be used as accommodation on festivals in the future. In the Wacken Foundation Camp you can visit a prototype of the Sleeping Can.

Another highlight of the camp is the PZA Restaurant of TV chef cook Tim Mälzer. He is already Wacken-proved and will spoil your palate with pizza from the stone oven. Additionally the countrywomen of Wacken will offer potatoes and quark in favour of the Wacken Foundation at their booth „Geprüfte Qualität - Schleswig-Holstein“. (verified quality of Schleswig-Holstein).

The association Sea Shepherd Germany, a marine conservation organisation who is committed in fighting against the exploitation of the oceans since more than 35 years is present with a booth again as well as Greenpeace. New in the camp are Viva con Agua Viva con Agua de St. Pauli who is involved in drinking water supply in developing countries, Greenpeace and the tourism association Nordsee Tourismus (North Sea Tourism).

Also ROCK SCIENCE has a booth in our camp. Here you can play the rock game of the century yourselves with more than 1,600 questions about hundreds of influencing rock bands like Kiss, AC/DC, Iron Maiden and Motörhead and take part in raffles and signing sessions.

A Fendt tractor will also be presented again. The bonnet will be airbrushed on site in the W:O:A 2013 design and signed by bands of the W:O:A 2013. Afterwards the bonnet will be auctioned in favour of the Wacken Foundation. For the gambler amongst you the poker lounge from pokerstars.de can be found in direct proximity to the Wacken Foundation Camp. The foundation is being benefited by pokerstars.de in the participation fee of the players.

A W:O:A-branded OPEL ADAM, provided by Auto-Zentrale Klaus Koch GmbH is being exhibited in the Camp as well. The ADAM is being signed by different bands from the W:O:A 2013 and will be auctioned afterwards. The proceeds got to the Wacken Foundation.

As you see there happened a lot since the first trial in 2012 in the Camp of the Wacken Foundation. A visit – no matter if you dropped in in 2012 already or not – is totally worth it!!!