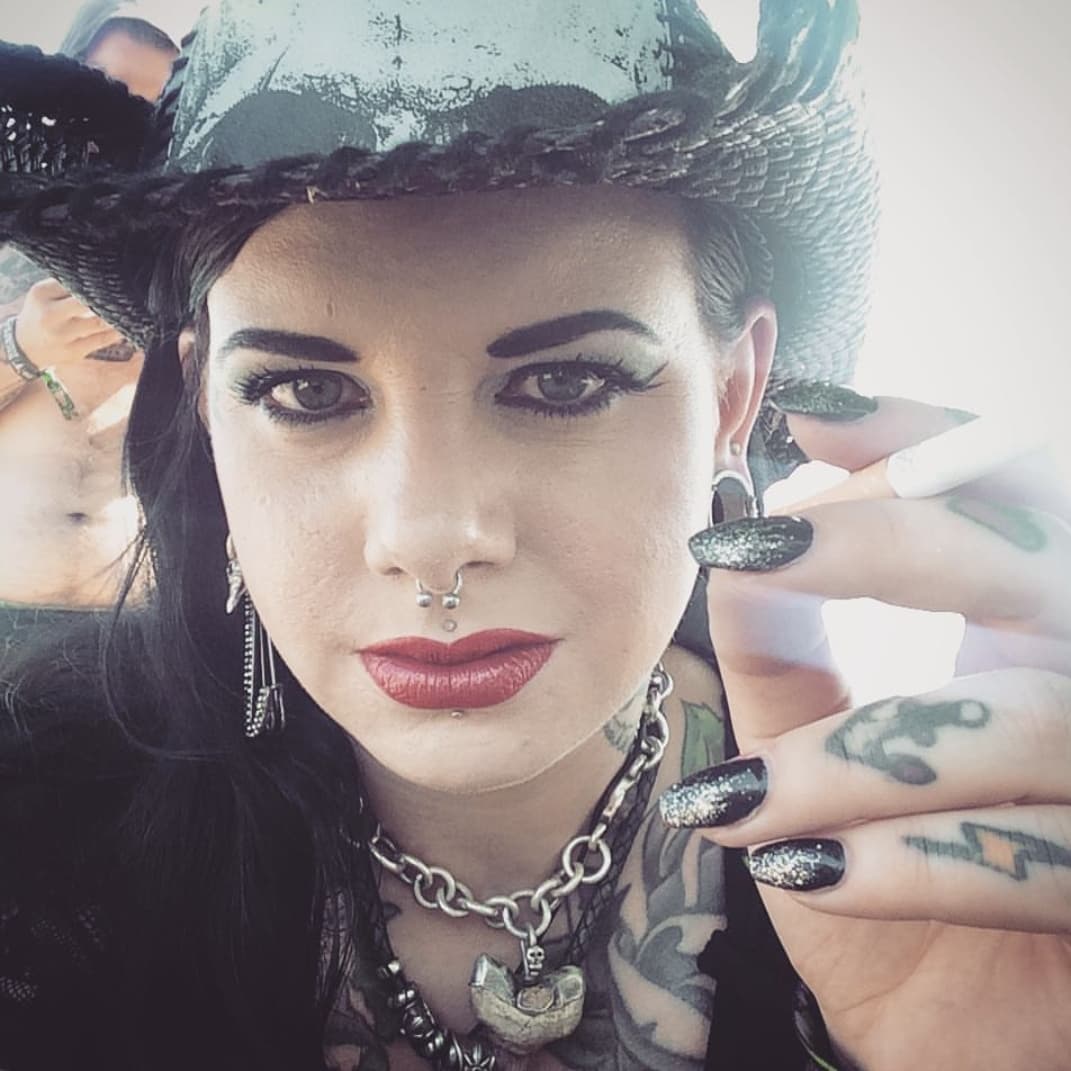 Liz Vegas (Tattoo artist, wearer of mud boots, gets under the stars’ skin)

„I have been tattooing for over eleven years now, seven of which I also worked in Wacken. I do not actually work for the festival though, usually bands contact me and ask me to come to the W:O:A. Over the years I had quite a number of clients even from England or the US. Since I live in Hamburg, appointments in Wacken are pretty convenient for me, since it is close and easy to reach.

Especially Steel Panther have been among my regular customers for many years now. Every time they play Wacken, they call me up and just say: ‚Liz, bring your travel kid!‘ – and then we are on. Since I know them by now, I understand their style and what kind of tattoos they like. So usually they just tell me their vague ideas, we exchange some pictures, I work on the motive, and when they arrive we can get right down to it.

One time though Lexxi Foxx showed up unannounced and asked me to tattoo his fingers. He wanted poker cards and had an upside down heart already, so he needed diamonds and spades. But no clubs, because, as he said: ‚We don’t do clubs!’

The most memorable story happened with Prong’s bass player Jason Christopher: We had been worked on his motive, a black rose on his head, for quite some time and set a date to get it done after the Prong show in their container at the Artist Village. Just when we were getting ready to start tattooing, someone from the Wacken crew informed us that we had to clear out the backstage. Nobody of us had thought about the fact that there would another band waiting to use that very container. So Prong had to move out, but there was no other room to be found. Needless to say that was quite depressing, so we had to drown our disappointment at the Jägermeister bar. Fortunately we were able to get the tattoo done on their next tour.

In general I love the working environment at the W:O:A. The whole of the Artist Village is organised perfectly, everything is very clean, not dirty or filthy at all, and you’re always able to close the door behind you – not unlike a Tattoo convention, come to think of it. Of course I have – just like any other Wacken visitor – drowned in the mud at some point. Whenever I work at the festival, I stay a little longer to watch the bands. So naturally I had mud flood my boots during those really rainy years. But that’s part of it all and doesn’t really matter.

The W:O:A always feels like something special. Despite it’s enormous size, you can be standing among thousands in front of the stage only to have an old friend tap you on the shoulder, saying: ‚How cool to meet you here!’ Wacken might be huge, but it’s populated by a wonderful little, loveable and always friendly Metal family!“

Liz' wish for the 30th W:O:A, if anything was possible:

„Wacken without Motörhead is just not the same. We all miss Lemmy so much. But my guilty pleasure wish would be Bon Jovi, my realistic one Korn.“