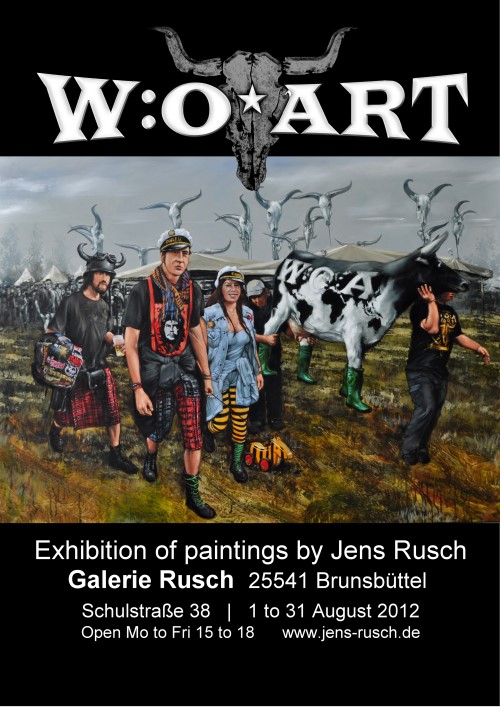 Indeed! At the 23rd Wacken Open Air Festival, a collection of artistry awaits you at the newborn www.wacken-foundation.de Camp.

Artists as Jens Rusch, Comic illustrator Kim Schmidt and portrait illustrator Tim Eckhorst will delight many Metalfans with their unique retained moments. Furthermore the pictures by Jens Rusch will be converted into 3D by Horus Vision, so that they share a feeling of reality. Likewise an exhibition from Gestalten Publisher is to be seen, where Jörg Brüggemans Photos from the illustrated Book “Metalheads” will be presented. The Exhibition „Schädelkult“, currently presented in the state museum Schloss Gottorf, will also be shown. Here you get an impression of the exhibition and have a quick view at the cultural meaning of skulls.

Who are the artists exactly? What are they doing at Wacken Open Air? And what are these artists offering us?

Kim Schmidt is a comic illustrator and cartoonist from Dollerup. His comics are said to lead the festival visitors into a humorous mood. Around 2:00 pm and 6:00 pm Schmidt offers for each time a signing session and takes this time to develop or show visitors, how to draw comics. The proceeds of this campaign will be given to Wacken Foundation

Since 2009, Tim Eckhorst draws Bands who performed at Wacken Open Air. Yet, his black and white drawings conduced as decoration for the W:O:A backstage area or as gifts for musicians. This year visitors should have the opportunity to look at his portraits. At W:O:A Eckhorst sells books about his artworks, whereby he shares a part of his proceed with Wacken Foundation.

Metalheads from all over the world are shown by the photographs of Jörg Brüggemann. His Portraits have their origin in, among others, Brazil, Indonesia, Malaysia, Egypt, Argentina, Germany, Austria, Switzerland and USA. His exhibition shall transport the strong connection between metal fans all over the world.

Finally the exhibition „Schädelkult“ by the state museum Schloss Gottorf will lead the visitors to a cultural event at Wacken Open Air. Schloss Gottorf contains two state museums of Schleswig-Holstein. Diverse exhibitions, theater plays and concerts take part at Schloss Gottorf, thereby they are integrated into many cultural events. At the 23rd Wacken Open Air, a part of the exhibition “Schädelkult” will be seen at the Wacken Foundation camp. Partially skulls from different parts of the world and in different forms will be shown. You can connect some historical backgrounds of the skulls with particular subcultures of heavy metal. “Schädelkult” shows, that the international human culture is been followed by Skulls for centuries. Among others, this can be seen at ancient collectibles, at the voodoism of Africa and nowadays for instance at the skull logo of the Soccer club St.Pauli from Hamburg. Besides, each visitor of Wacken Open Air has the opportunity to visit Schloss Gottorfs exhibition. At Schloss Gottorf they will get a 33% discount, so far the Festival Ticket is shown.