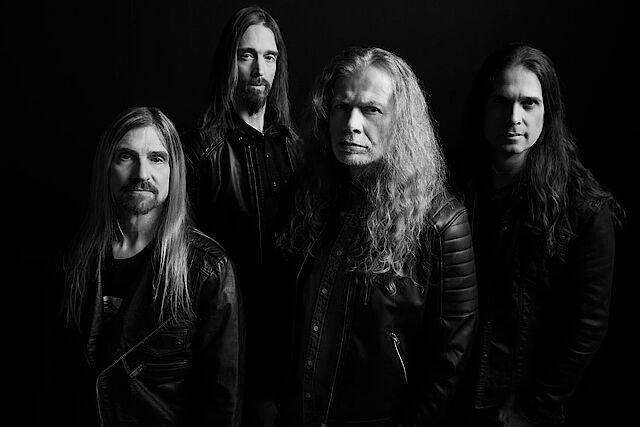 It was over 30 years ago that Dave Mustaine founded MEGADETH, in the process pioneering the sound that would become known the world over as thrash metal. And from the very beginning, the band proved to be the most lethal and audacious unit on the heavy music scene, pushing thrash to the limits of musical ferocity and instrumental virtuosity on early efforts like their 1985 debut, Killing Is My Business…And Business Is Good! and 1986’s seminal Peace Sells…But Who’s Buying?.

In the decades since, MEGADETH have taken their place as one of metal’s most influential and respected acts—not to mention among its most successful. They have gone on to sell more than 38 million albums worldwide, earning numerous accolades including a 2017 GRAMMY® Award for “Best Metal Performance” for the title track “Dystopia,” 12 GRAMMY® nominations, and scoring five consecutive platinum albums. With sheer determination and a relentless recording and touring schedule, MEGADETH worked their way up from headlining clubs to headlining arenas, festival and stadiums, cementing a legacy that continues to grow and spread throughout the world.

The band’s beginning started in 1984, Dave Mustaine was determined to start a new band that would be heavier and faster than his peers. Mustaine’s songwriting was rapidly maturing, and he set about combining the attitude and energy of punk, with the power and intricate riffing of metal, along with direct, sociopolitical lyrical content. With David Ellefson on bass and Gar Samuelson on drums, the band recorded their infamous 3-song demo which quickly circulated through the underground tape-trading circuit and became an underground hit leading to a deal with Combat Records. The band’s 1985 debut Killing Is My Business…And Business Is Good, was the album that would lay down the blueprint and establish MEGADETH as one of the four pioneers, known as the “Big Four,” who virtually invented a genre with their debut album lauded by VH1 as the “Greatest Thrash Metal Debut Album of All Time”.

MEGADETH was quickly signed by Capitol Records and released their 1986 major label debut Peace Sells…But Who’s Buying?, which became the band’s first certified gold record and would go on to become MEGADETH’s first platinum selling release which Pitchfork describes as “everything great about hardcore, plus a dose of the kind of show-off skill that makes lesser musicians' fingers bleed.” They followed with their platinum selling So Far, So Good, So What! (1988); GRAMMY® nominated, platinum album Rust In Peace (1990) featuring “Hanger 18” and “Holy Wars…The Punishment Due;” 1992 GRAMMY® nominated, double platinum release Countdown To Extinction  with singles “Symphony of Destruction” and “Sweating Bullets”; “A Tout Le Monde” and “Reckoning Day” from their 1994 platinum selling release Youthanasia; “Kingmaker” from their 2013 Top Ten release Super Collider, which hit No. 3 on both the Hard Rock Albums and Top Rock Albums charts. “She-Wolf” was from the GRAMMY® nominated, Top Ten release Cryptic Writings (1997).

In 2016 MEGADETH once again reinvented themselves as the legendary metal outfit, led by visionary singer, guitarist and songwriter Dave Mustaine, and released their 15th studio effort Dystopia, which debuted at No. 3 on the Billboard Top 200, No. 1 on the Hard Music/Top Rock Chart, No. 2 on the Top Album Sales chart, No. 2 on iTtunes’ Top Albums chart and No 1. on iTunes’ Metal chart. The title track “Dystopia” went on to win a 2017 GRAMMY® Award for “Best Metal Performance.” The album, which saw Mustaine once again joined by stalwart bassist David Ellefson, was the first MEGADETH effort to feature new guitarist Kiko Louriero and drummer Chris Adler, the latter on loan from Lamb of God. Together, they inject new levels of musical venom and instrumental dexterity into what was already a wickedly potent brew.

Since its release, MEGADETH had been touring around the world non-stop in support of Dystopia, adding Dirk Verbeuren as MEGADETH’s fulltime drummer.

In between tour legs, the band had been in the studio writing and recording when late last year, MEGADETH’s plans were temporarily sidelined when Mustaine was diagnosed with cancer. His bandmates all rallied around Mustaine and took on his MEGADETH commitments while he received treatment. Mustaine approached his cancer as with things all his life – devoting all his energy and passion – to succeed. With clearance from his doctors, Mustaine immediately returned to a full schedule as MEGADETH kicks off 2020 with a worldwide tour with the band continuing its work on their highly anticipated 16th studio album.

More than three decades after the release of Killing Is My Business, and following through benchmark metal masterpieces like Peace Sells, 1990’s Rust in Peace, 2009’s Endgame and 2016’s Dystopia, the thrash legends, with Mustaine firmly at the helm, are showing no signs of slowing down.

For MEGADETH, the future starts now.